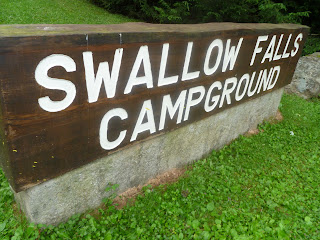 We hooked Anna up and headed to our favorite Maryland State Park this weekend. We have been here a few times in the past and the beauty of this park always astounds us. It was developed by the Civilian Conservation Corp but has been a place many have visited over the years. 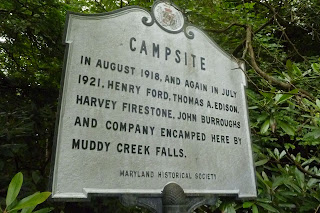 There is no mention of the numerous Native People that surely camped here, but Henry Ford was an avid camper and this was a place he loved to visit. 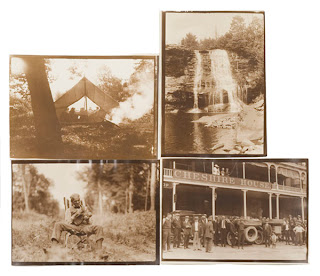 The upper two photos above are from one of these trips to what is now the Park. Make a note of the size of the trees next to the falls. Most of Western Maryland had been timbered by the time Henry Ford camped here. The Park contains 35 acres of virgin hemlock forest. This is the only remaining virgin forest in the entire State. 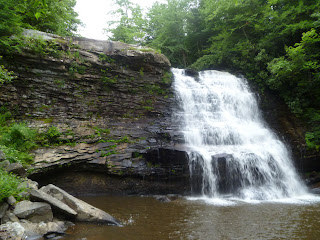 We watched a couple of fisherman catch 7 keeper brown trout in about 20 minutes time from below Muddy Creek Falls. I kept wondering if Henry Ford had the same luck. 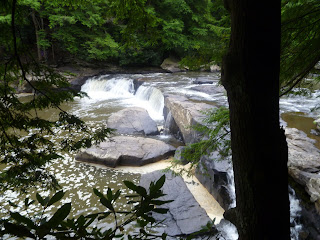 This is the name sake falls. The last time we were here was during a fairly wet summer and the water level was a good two feet higher than it is now. None the less, it is a beautiful water fall. 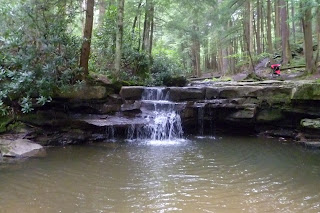 My favorite falls is the smallest one in the Park. It is called Tolliver Falls. I love the way it steps down the bed rock. It is not seen in the photo, but it steps down the bedrock for about 100 yards before dumping into the main pool. You have to hike through the part of the Park where the virgin hemlocks are to get to this falls. 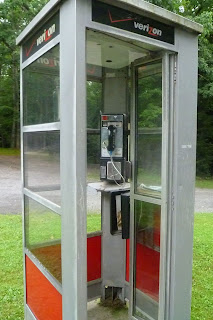 Another thing I like about the park; it has a phone booth with a pay phone. The phone booth even has a current yellow pages in it.  The fact that the sites are generous, the park is clean as a whistle, and not overly crowed as most State Parks are closer to the cities, makes Swallow Falls a big hit with my family. 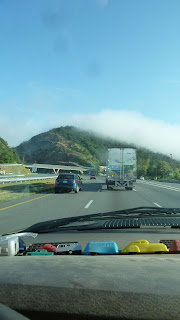 Not being from Maryland, you may not know this location. This is Sideling Hill, elevation 2310 feet. At one time Sideling Hill was as tall as the current height of the Himalayas. A few million years have worn the Appalachians to mere hills by Western State standards.  When traveling west on I-70 you must go through Sideling Hill. For me, this is where Western Maryland begins. This cut through Sideling Hill also delineates the beginning of many of my adventures. 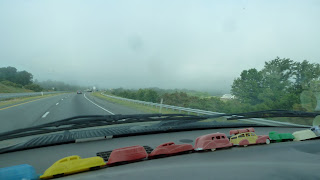 You never know what lies on the other side of the mountain. In this case, you can't see much ahead because your head is still in the clouds. I thought of this as a foreshadowing. My first destination was
Ann Arbor, Michigan. The reason for going to Ann Arbor? My cousin David passed on. David was always my favorite cousin (sorry to all the rest of you, I mean no disrespect, everyone has favorites--it is human nature). He was the kind of guy that treated everyone like they were important. He never treated me like a kid, he treated me like an equal. He had my respect and I had his. I was heading out to attend his memorial service. I went alone due to Beth's new job and the lack of extra vacation time on her end. Going solo was actually a good thing for me. It gave me time to "talk" with David and get a lot of sadness off my chest. Yes, I talk to the dead and oddly they talk to me too. By the time I arrived in Ann Arbor I was all done with my mourning. 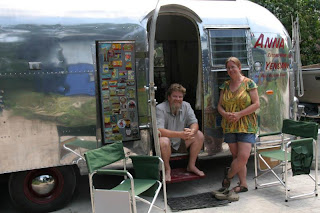 My cousin Linda(David's sister) hooked me up with a super nice spot to driveway camp. It is refreshing to have your home wherever you go. I was shown around town and have to say Ann Arbor is a very nice little city. The people are very progressive and the building stock is really cool. Unfortunately, no pictures were taken, even though my camera was in my pocket the entire time. I guess I was too busy listening to snap any photos. I was just taking it all in. I am not too sure if I able to ease any of my family members' grieving over the loss of David, but I am sure glad I went nonetheless. 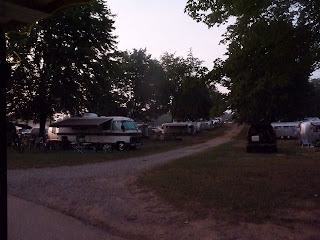 My next destination was Coopers Lake Campground. For the third year in a row I have been one of the hosts for an annual Airstream rally called the Birthday Bash. We gather to celebrate the founder of Airstream's birthday. It makes an excellent excuse to get together, talk too much, eat too much, drink too much, and spent too much time relaxing. Unlike previous years, the entire region was in a major heat have. We made a last minute venue change from the lake to the area with full hook up. I think everyone was grateful to be able to run their AC even if they spent virtually all their time outside talking in 100+ degree heat. 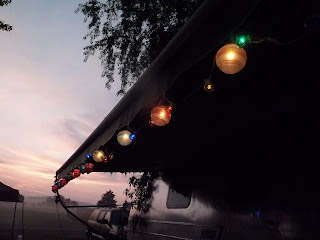 Most of my photos are at sunrise. I found this time, before we got breakfast rolling, to be a great time to take in the aluminum. I hope no one in these sunrise pictures is offended. I took some early morning photos a few years back, and was accused of sneaking around. Special Ed was not in attendance so I think we will be okay with what you will see. 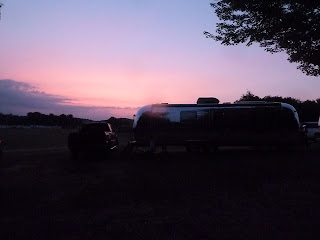 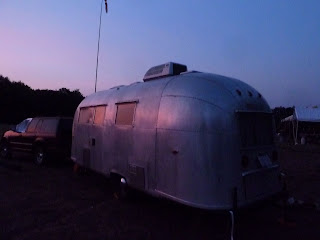 There were some of my clients in attendance. The Toaster came. Mary and Rick have been putting their rig to serious use after her restoration. I think they are making up for lost time. I feel a huge sense of pride in seeing a 51 year old trailer put into service again. Godspeed,Toaster... 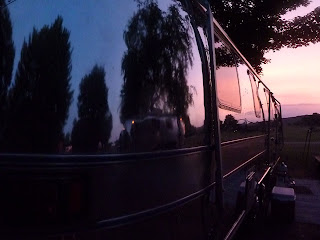 Priscilla was there, too. I did the axles for Ed and Tim a few months back. Ed has been pouring on the love, and the polish job he did was stunning, to say the least. 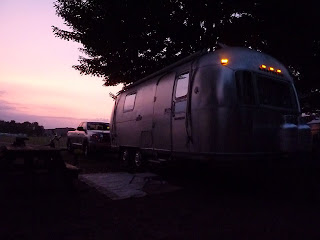 Rosie was there, too. Elly has been slowly, but very surely, putting hers back together again. She now has a toilet and functioning bathroom. She is not fully functional yet, but that has not stopped Elly from using her. I have mad respect for Elly and all that she has done by herself. I think she could have done the structural work which was completed by Frank's Trailer Works with the confidence she has gained doing all the rest herself. An incredible woman, that Elly Cramer. 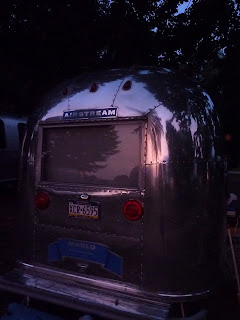 You might remember Roy from our caravan to Madison a few years back. He was the guy who took 30 total strangers out to his mother-in-law's house to courtesy park. Roy has been coming to the Bash ever since. He is a guy who gives way more than he takes. Heck, everyone in attendance fits that description. 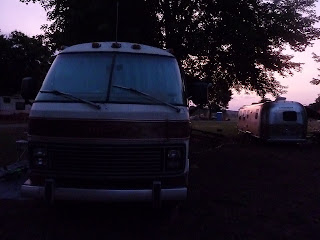 We had a MoHo come. It was an Airstream Moho, so it was very welcome. There was supposed to be another one coming, too, but unfortunately a family crisis came up and they were not able to attend. I dig Airstream motor homes when they were still produced like the travel trailers. When they began to look like the white flat sided motor homes that my interest ended. To be honest, we welcome anyone to attend. It is our belief that the curious can become believers. Show them the Airstreamer's way of life and they want to be a part of it. 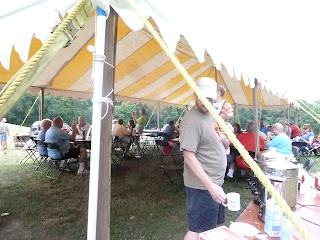 The day starts with coffee at 6am for the early risers. Yes, some of us like to wake with the sun. Having a great cup of coffee with friends is an excellent way to double down on the odds of making that day excellent. 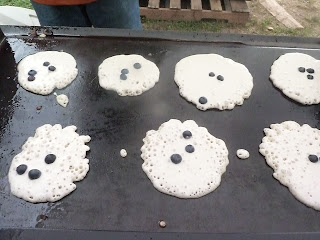 Breakfast was served by 8am everyday. They say it is the most important meal of the day and I tend to agree. When I first started attending rallies, the tradition was a continental breakfast. I would see that people came out of their trailers, filled their coffee mugs up, grabbed a danish and headed back to their trailers. When we serve a full breakfast, people tend to linger. They converse and hatch plans as to how to spend the day together.  Each day we served plain and blueberry pancakes. Blueberry was wildly popular. Maybe next year we will try banana out on the crowd too. 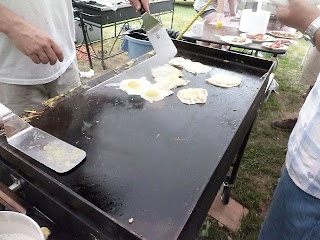 Eggs to order. Sunny side up, over easy, over medium, over hard, murdered, scrambled were all requested. Oddly, no one asked for an omelet. 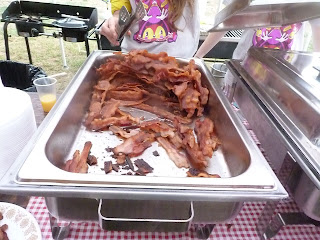 100 pounds of bacon was cooked over the four breakfasts. I think some vegetarians broke their streak. Bash Bacon is hard to pass up. 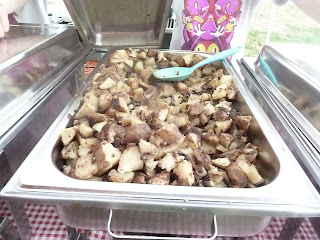 We cooked about 75 pounds of breakfast potatoes during the event. 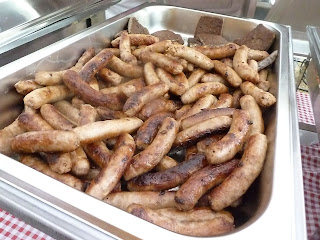 There were a bunch of Ostrowski's sausages for those wanting them, too. You may note the scrapple in the back of the tray. Not a huge hit with many, but those that like it sure love it. It didn't make the photos, but we had corned beef hash also. That stuff is always a huge hit. 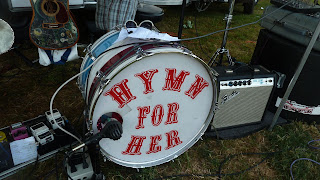 Speaking of hits, We had a killer band. 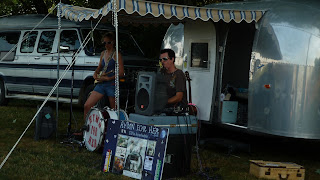 They are Airstreamers. I suggest you check them out sometime. 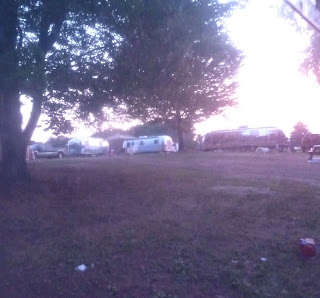 All of this was upon reflection... 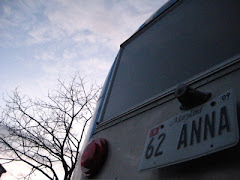